Joel DuBois, Program Specialist
Email: This email address is being protected from spambots. You need JavaScript enabled to view it.

Dave Burns, Program Coordinator
E-Mail: This email address is being protected from spambots. You need JavaScript enabled to view it.

Since 1997, GCSWCD has been working in partnership with the New York City Department Of Environmental Protection Stream Management Program (NYCDEP-SMP) on the development of comprehensive Stream Management Plans (SMP) for streams which supply the City’s upstate reservoirs. In 2002, this process was extended to the West Kill watershed, and working with a local project advisory committee a detailed stream management plan for the West Kill was completed.

Located in the Town of Lexington, the West Kill Stream has a reputation as a productive wild trout fishery. The West Kill has benefited from cold groundwater contributions and a fairly good riparian zone which shades the stream. The Westkill Valley also has a long history of damaging floods. From a flood event in 1927 which wiped out every bridge in Spruceton valley, to more recent events in 1996 & 99 which resulted in significant instability in the stream corridor and over 5 million dollars in damages to public infrastructure.

On December 31, 2005 GCSWCD and NYC DEP completed the first draft of the West Kill Stream Management Plan which was presented to the USEPA as a component of the City’s watershed protection program. The SMP represents the most detailed assessment of the streams physical condition that has ever been completed, and it is backed by several years of field collected data as well as extensive research and analysis of many factors which may influence stream stability.

Based on recommendations set forth in the West Kill Stream Management Plan, GCSWCD and NYC DEP have completed several West Kill restoration projects in order to improve and help protect water quality in the Schoharie basin. 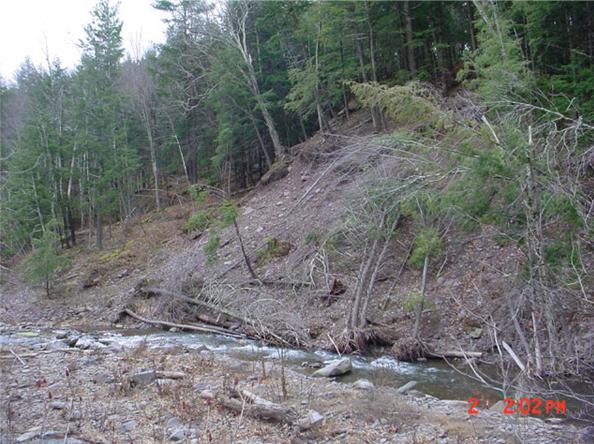 Long Road Stream Restoration Project (2009), Town of Lexington: Inventories of the West Kill were conducted in 2000 and 2004 as part of the stream management planning process. Planning staff prioritized the Long Road reach for restoration based on extensive geomorphic instability as demonstrated by large-scale erosion and bank failure. The reach contained more than 23% of all the clay exposures identified in the 2004 inventory, and 40% of the reach was experiencing erosion. The position of the channel, evidence of recent channel migration, and excessive sedimentation indicated 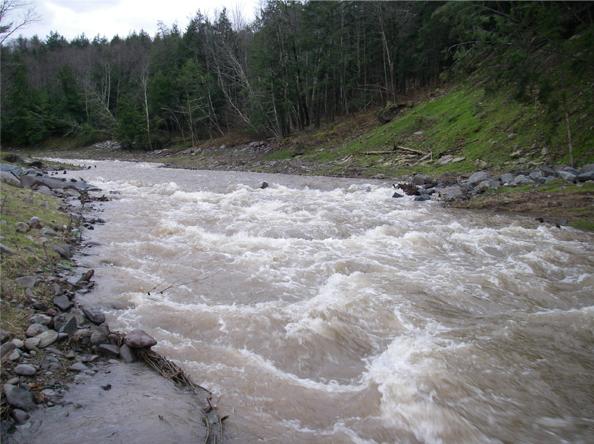 site ranked in the High Priority category. The project addressed bank erosion that had undermined several hundred feet of fencing along a horse pasture on the right bank and threatened the main drive into the stables. Some sections of the restoration treatment area had become overwidened and had developed large center bars. The mitigation strategy selected involved a variety of channel stabilization measures designed to hold a planform, cross-section, and slope that would improve sediment conveyance through the reach, but limit shear stresses on high banks and on clay exposures in the channel.
Project partners: GCSWCD, NYCDEP, Private Landowner
Complete project report

Shoemaker Stream Restoration Project (2005), Town of Lexington: The West Kill stream in this project reach experienced significant degradation as the result of flood events in 1987, 1996 and 1999. In the 1996 flood event, high flows stripped the streambed of its protective armor, exposing deposits of lacusterine clays and causing rapid down cutting of the stream reach. As a result of this incisement, the stream became extremely entrenched, and the adjoining slope experienced a geo-technical failure that damaged a nearby county road (CRT 6) and resulted in the loss of a county bridge. Based on observations of the stream system, history of the reach and measurements of the stream channel morphology, Kaaterskill Engineering Associates (KEA), GCSWCD, and NYC DEP selected a stream restoration strategy which would provide a stable stream form and restore stream function. The selected mitigation measures addressed the stability of the streambed, established a stable planform and created a working two-stage channel with a bankfull channel and an adjoining floodplain area.
Project partners: GCSWCD, NYCDEP, FEMA, Private Landowners
Complete project report

View More Restoration and Retrofit Projects in the Schoharie Basin