A local trail committee, originally oganized through the Mountaintop Community Resource Strategy, worked with the New York-New Jersey Trail Conference, property owners, the Town of Hunter, NYSDEC, the Mountain Top Historical Society, and Greene County Soil & Water Conservation District to open a pristine, undisturbed stretch of the Ulster—Delaware Railroad line as a public hiking trail. This trail, now known as the Kaaterskill Rail Trail (KRT), provides amazing views of the famous Kaaterskill Falls and provides a link between the Mountain Top Historical Society and the facilities at North-South Lake. Future trail development and extensions to the KRT are currently being discussed with a newly-formed local trail committee, known as the Hunter Area Trails Coalition (HATC). 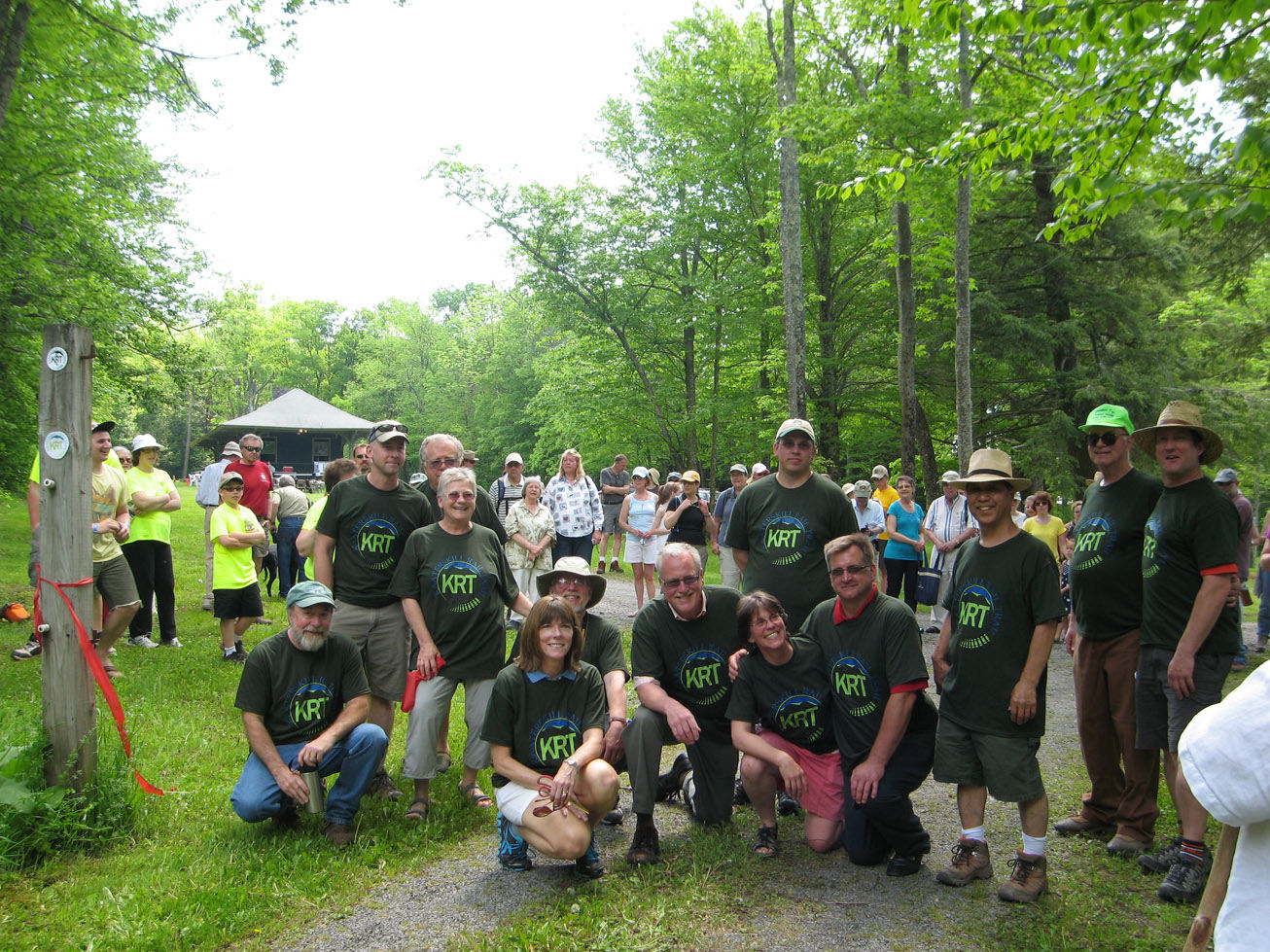 Phase 1 - On June 2, 2013, under beautiful sunny skies, the ribbon was cut on Phase 1 of the historic Kaaterskill Rail Trail (KRT) in Haines Falls, NY. After three years, the Kaaterskill Rail Trail committee was successful in securing trail easements from four landowners. The 1.5-mile trail runs from the grounds of the Mountain Top Historical Society, in Haines Falls, to the end of Laurel House Road, just a five-minute walk from the top of Kaaterskill Falls in the 8,550-acre Kaaterskill Wild Forest preserve and near the NYSDEC North/South Lake Campground. It roughly follows what was originally a footpath dating back to the 1820s that connected the Catskill Mountain House to hotels in Haines Falls. 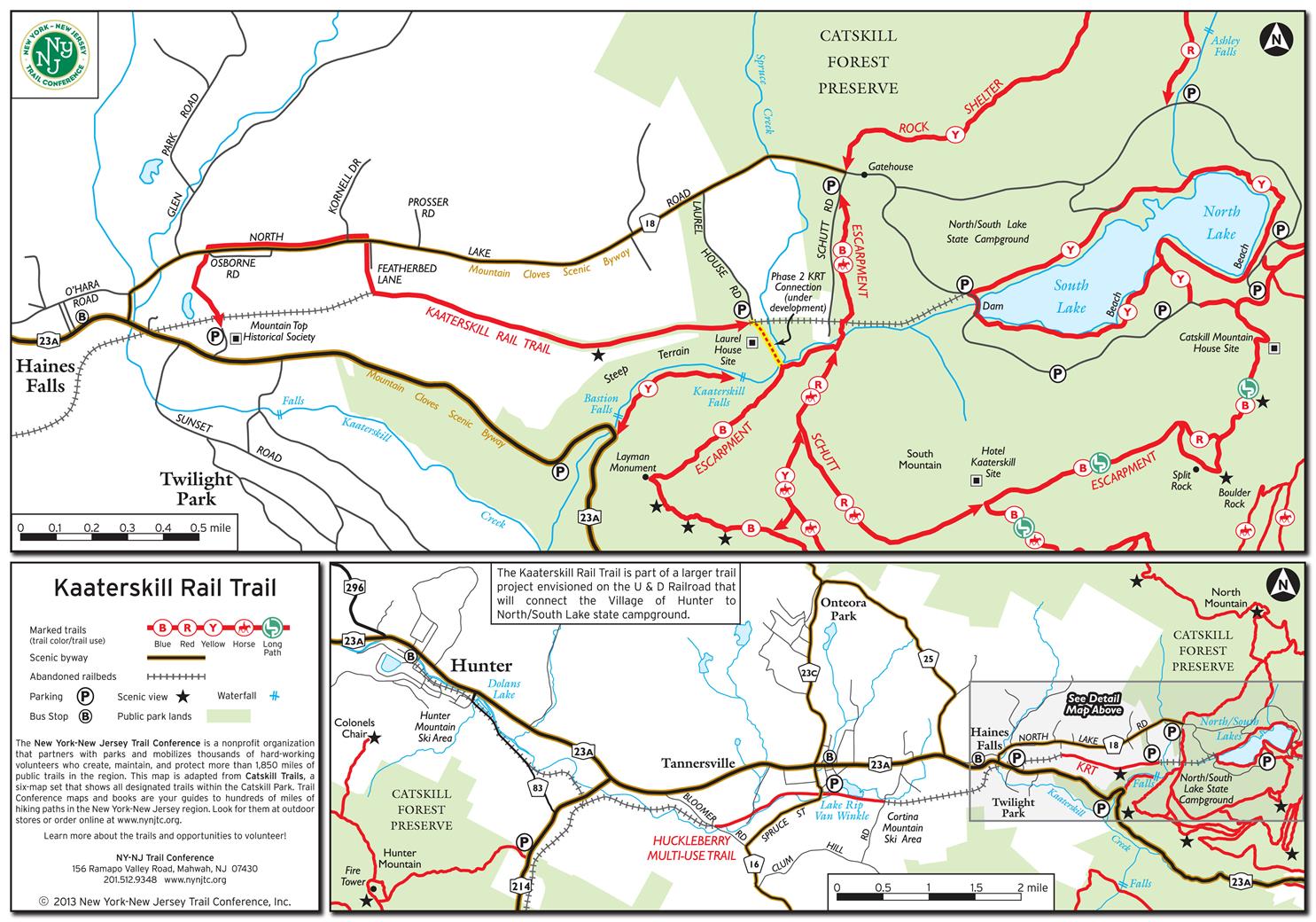 In order to complete Phase 1, the KRT committee raised $120,000 to purchase the final property needed to complete this section of the trail. The Open Space Institute, the NY-NJ Trail Conference, and the Mountain Top Historical Society funded the purchase. On May 20, 2017, there was another community celebration marking the end of the 2013 detour and the opening of the missing link. Walkers and hikers can now enter the KRT along the old train route as envisioned by many for so long. This long-awaited achievement was made possible through a broad coalition of groups and individuals. 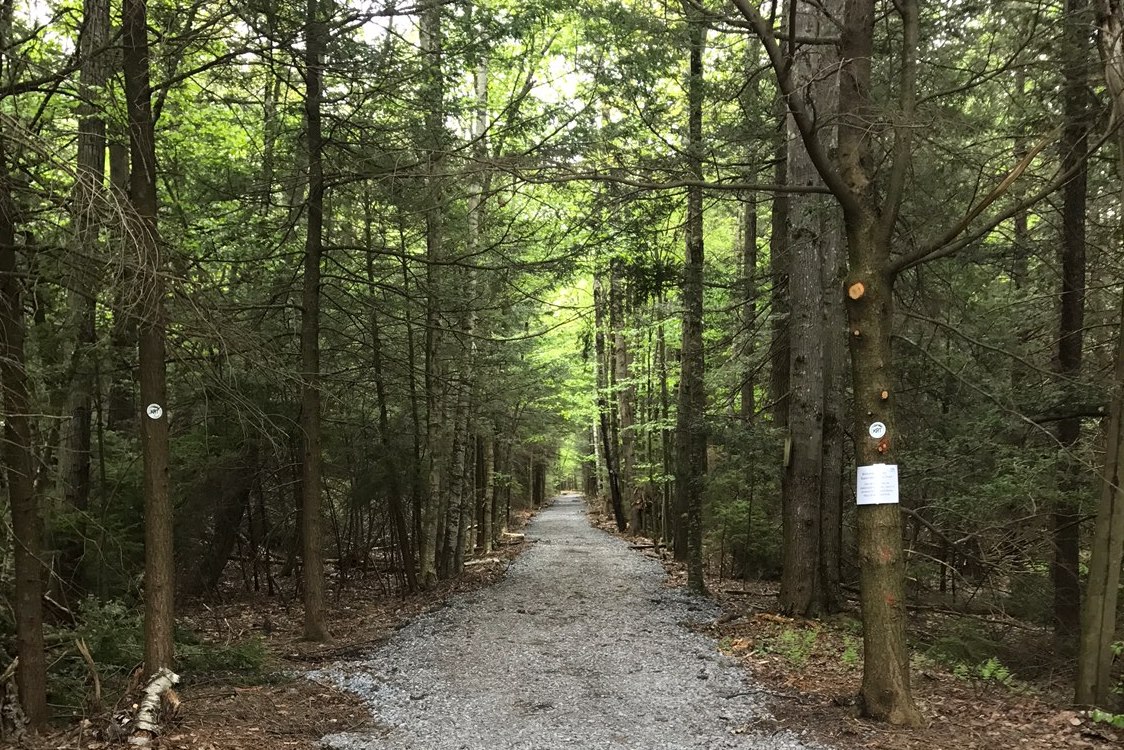 Phase 2 - This phase of the KRT is on New York State land in the Kaaterskill Wild Forest. Following the success of opening Phase 1 on the former railroad bed, the NYS Department of Environmental Conservation (DEC) acknowledged it was time to upgrade the trails in and around Kaaterskill Falls to make access safer and more manageable. The DEC invested over $800,000 in safety and accessibility improvements including: 1) installing a 115-foot hiking bridge that spans Spruce Creek and connects the hamlet of Haines Falls to the Escarpment Trail and North/South Lake Campground, 2) constructing a new foot trail leading from the end of the marked Kaaterskill Falls trail at the base of the falls upslope to the middle pool of the falls, 3) installing a stone staircase designed to blend in with the natural stone of the area at a location that limits its visibility from below, 4) expanding two parking areas, 5) constructing an observation platform overlooking the top of the falls and 6) building new, wide, smooth surface trails with level resting areas. A celebration was held on September 13, 2017 at the top of Kaaterskill Falls to promote trail safety during the busy hiking season. Over 125 people attended including state, county, and local officials, as well as numerous trail and regional organizations. 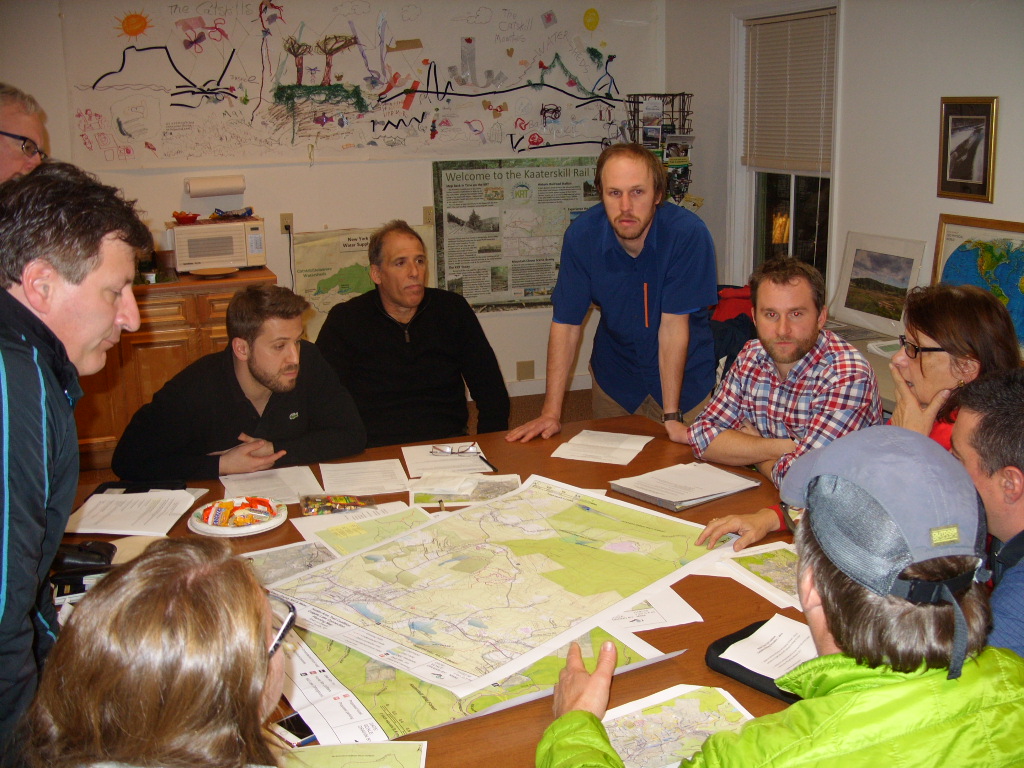 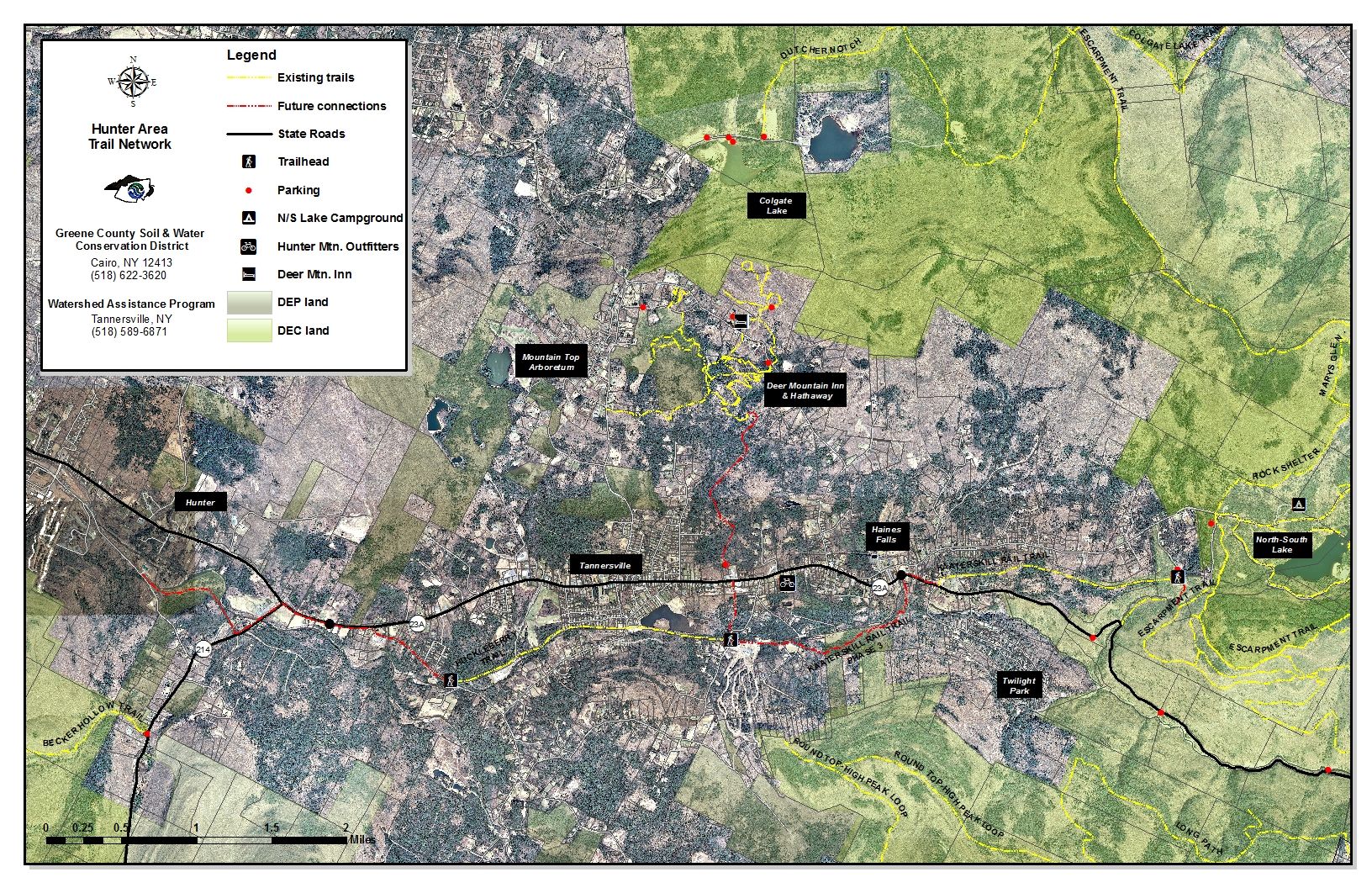 Phase 3 - This phase is the KRT extension and will connect the Mountain Top Historical Society in Haines Falls to the Huckleberry Trail in Tannersville. The Town of Hunter was awarded a $75,000 NYSDEC Smart Growth grant to complete Phase 3 and market and advertise the growing network in the town. Work is due to begin in the spring of 2018. 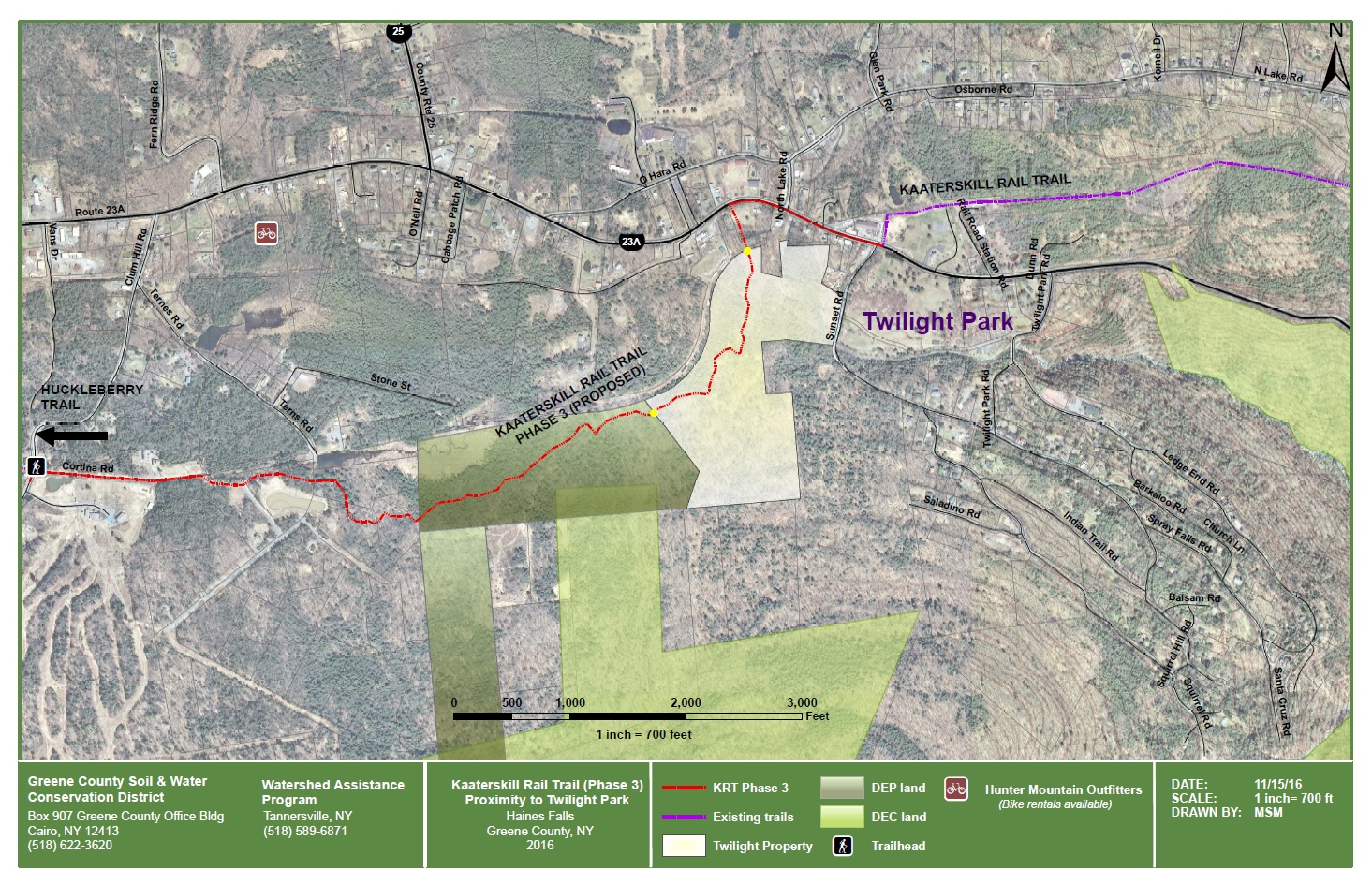 Step back in time on the KRT - The Northern Catskills area is one of the earliest vacation destinations in America. In the early 1800s “going to the Catskills” meant going to the Kaaterskill Region. Haines Falls and the nearby Catskill Mountain House were at the region's heart.

As you embark on the Kaaterskill Rail Trail (KRT), you are about to step into history. The trail was first a footpath connecting the Catskill Mountain House and other hotels to Haines Falls. By the 1880s additional boarding houses and the grand Hotel Kaaterskill attracted many travelers. The old footpath had made way for a rail corridor which, at its peak, saw two competing passenger rail lines following parallel tracks toward the Catskill escarpment. Thousands of vacationers arrived each summer via the newly-constructed rail lines to see the picturesque scenery and stay at the many boarding houses, hotels and resorts, such as the Laurel House.

Historic railroad station - At the end of the KRT trail (1.5 miles) you will find the Haines Falls Station of the Ulster and Delaware (U&D) Railroad. Built in 1913 to replace an earlier station located at then Haines Corners, it went out of service in 1940 when rail service in the area ended. For several years it was a private home. It is now the beautifully-restored home of the Mountain Top Historical Society.

Finding clues of the past - As you walk the trail, look for signs of the railroad—stone culverts from the 1880s, railroad bridge abutments, logging roads, cinders from the steam engines, remnants of the hotels, and glimpses of Kaaterskill Falls which were once clearly visible from the trains. Observe, too, how nature is returning the region to a more natural state—the very state that brought the original tourists to the Kaaterskill Region.

North/South Lake Campground and Day Use Area to the north and the Indian Head Wilderness to the south in Platte Clove. Article 14 of the New York State Constitution states in part, “The lands of the state, now owned or hereafter acquired, constituting the forest preserve as now fixed by law, shall be kept as wild forest lands.”

In 2013, 41 miles of state and county roadway were designated NYS Scenic Byways in the Town of Hunter. Following earlier initiatives that promote the scenic, cultural and historic resources of the area, such as Preserve America and Hudson River School Art Trail, the Mountain Cloves Scenic Byway embraces the richness of intrinsic qualities that inspired past generations and recognizes that, through a profound travel experience, these resources support sustainable economic development that is based in the celebration of this unique landscape.

How can you help us protect the Kaaterskill Rail Trail?